i was reading dogen (the guy who brought the first tea bowl from china to japan) and studying soto zen buddhism around the time i decided to pursue art as a life. needless to say, i wanted to make japanese pots. so i started making pots that looked like the ones i'd seen in books or at museums or SOFA in chicago. i was more into the 'practice' of making a bowl or a cup. making multiples of everything. meditating on the practice of making a bowl. cutting a foot. glazing. and firing. trying to be simple in my approach and thoughtful in my gestures. however, i was trying to be something i was not.


as an undergraduate i read George Lindbeck as a part of a religion class. his basic (paraphrased) premise is that culture and language cannot be separated. for example: i, as a midwestern-american-english-with-a-drawl-more-like-a-slur potter, cannot make a chawan because i do not speak japanese nor do i come from the culture that produced the works i admire. bummer. it made me think about what a midwestern-american-english-with-a-drawl-more-like-a-slur cup looks like. we don't have a tea ceremony. no need for a tea bowl, except to look pretty on the mantle with the wooden box behind it, displayed proudly. we typically buy cheap designed-for-the-masses, chinese made dishes from wal-mart. buying the pretty pattern and trusting it not to have lead in the enamel painting. i gave up on the idea of trying to make a chawan. but not on the ideas that spawned the chawan. the simple notion of being aware enough to be affected.


i drink coffee every morning. black as hell. and made in a rather gross mr. coffee. but i drink it out of a cool mug. that's as important to me as the coffee in the mug. i hate drinking from a wal-mart mug. it's just dull. and i don't like dull shit. and because drinking coffee is such a ritual part of my life, i think that the mug should likewise be thought of as a ritual vessel, like a chawan, but in the form of a midwestern-american-english-with-a-drawl-more-like-a-slur coffee mug.

Zach and I had a very productive day. In addition to painting the bedroom (yes, we're finally getting rid of that red wall and settling on a color we can both agree on!), Zach cut new blocks and printed some cards ...


and I baked us some chocolate chip walnut cookies to satisfy a craving we've both had for weeks. 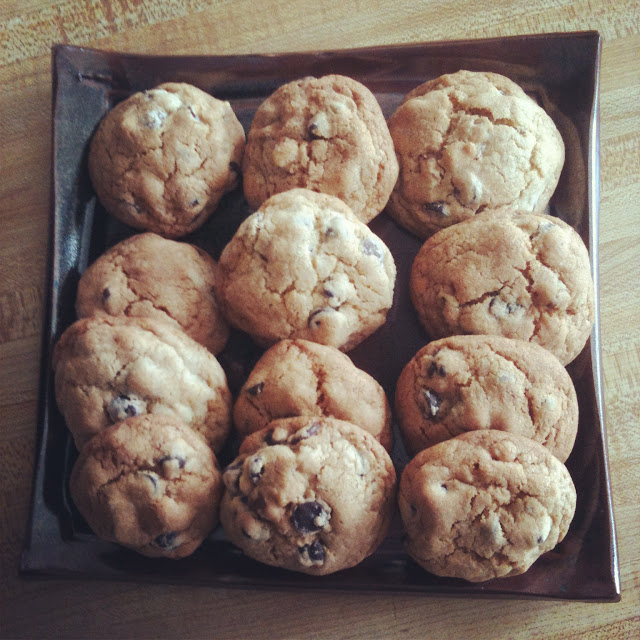 It always amazes me how much feedback we get on Facebook for the creations we whip up in the kitchen (vs. the studio). We promised Facebook friends we'd post the recipe on our blog. It seemed like the perfect opportunity to direct them here since we have grand plans to grow this blog together. I'll be the occasional photo blogger and "lifestyle" contributor (haha!), and Zach will use this as a space to (amongst a myriad of other topics) talk about the things he's working on and the experiences that inspire his work ...

So without further ado, here's the recipe for that delicious crisp on the edges, chewy in the middle chocolate chip walnut cookie ... 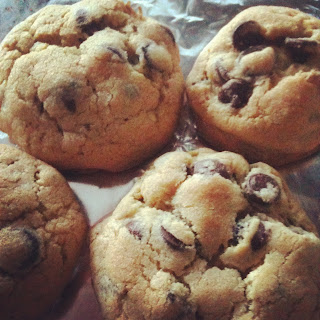 Directions
Preheat oven to 350 degrees F.
Cream together the butter, white sugar, and brown sugar until smooth. Beat in the eggs one at a time, then stir in the vanilla. Dissolve baking soda in hot water. Add to batter along with salt. Stir in flour, chocolate chips, and nuts. Drop by large spoonfuls onto baking pan (if you like crispier cookies, flatten the dough some, otherwise just leave them in doughy balls).
Bake for about 12-15 minutes in the preheated oven, or until edges are nicely browned.

I love autumn days partly because of the colors from the garden ... 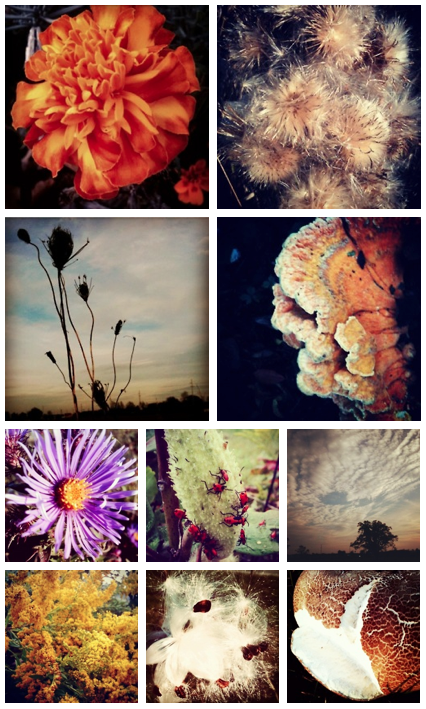 building a suburban neighborhood in 3 days

building a suburban neighborhood in 3 days.  just like the real deal beazer homes that popped up every other week when i was a kid.  we have 10 house templates and you can choose your own floor plan.  visit our model home.  notice the fine amenities that we can equip your new home with.  customized to look like exactly your neighbor's home, but different.  all for that low beazer price.  the difference i guess is that my porcelain houses will not succumb to the cheap-chinese-drywall-mildew-death syndrome that all the pop-up housing editions were plagued with.

this is a new installation i'm working on entitled 'sprawl' and these are the initial houses that will create the cul-de-sacs and little editions that spread across the gallery space and up the walls.  growing up in the suburbs i saw my town double in population while i was in high school.  housing edition after housing edition popping up like video on the old VH1 show.  each had its own name on a little sign as you entered the edition.  pleasant meadows or oakwood or pine village.  something inane and washed out like a painting you buy at the mall.  my brothers and i referred to them as vinyl villages.  which makes for an interesting contrast considering i'm making my houses from porcelain.

there is still a lot of work to be done on this show as these are only ready to be bisque fired for the first time.  my hope is that this is an installation i can continue to add pieces to and change each time i show it, in the same way i've done with some of my other work.

ps. my latest mixed media installation piece, "post-industrial," is currently on display at the College of the Sequoias in Visalia, CA. you can find a write-up of the show here.

i visited Shades State Park near the tiny town of Waveland, IN the other day.  a place that is a sanctuary of sorts for me.  when i was a young student and runner at Wabash College, i'd visit the park often to run the trails at a torrid pace, explore the woods, and breathe the cool the air exhaled from the trees.  no matter how often i went, it was always an amazing experience; rejuvenating, exhilarating, and humbling.   these days i've continued to visit a few times a year, however the running has become what i call "rucking" a run/hike/explore/photog hybrid that allows me to get a decent workout and have fun in the woods at the same time, all while making it back to the car without keeling over from asthma or being out of shape. 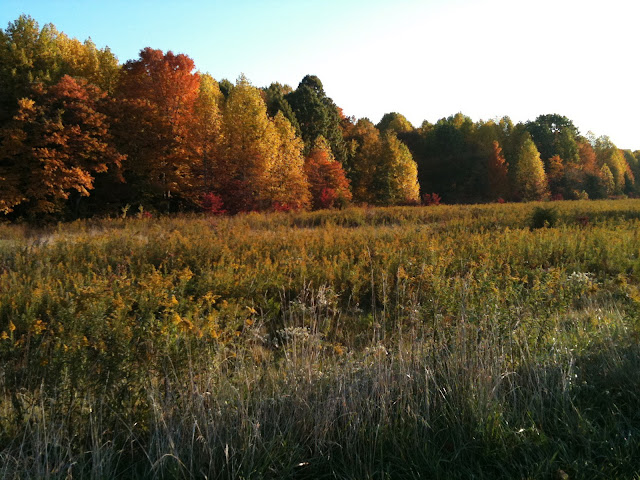 i drove down 231 to the park early in the morning, passed the fog filled flood plains of the wabash river and my alma mater. through a low and hazy morning glow. arriving at the park i found my formerly 'free' parking space to be fenced off and grown over.  so i turned around and entered the park from the main entrance and paid the $5 fee to get in for the day.  this is the first time in 10 years that i've paid to get into this park.  i parked my car, got out, pissed in the bushes near the lot, laced up my shoes and started off.  the air was cool and crisp, slightly dewy above the goldenrod field that preceded the woods.  i made my way through the shoulder high prairie grasses and into the trees, stepping on the trail and breathing in those first gasps of cool air that rushes from under the trees.  immediately i spooked a couple of deer near the trail, though all i caught of them was the rustle of the underbrush and two white tear drops dancing through the trees until they disappeared.  i followed along the trail for about an hour, running a bit, walking some, stopping to take pictures and gather handfuls of red leaves.  when i came to a place where the trail crossed the stream i stopped for a few moments to quickly make a small and sketchy work of art inspired by andy goldsworthy.  i scattered the red leaves i'd collected in a small slow moving stream.  as they followed the current, they scattered themselves in a red line around a bend in the stream.  after taking several photographs of my average efforts, i continued along the trail and looped back around until i came back to the main part of the park.

there's a place down at the bottom of the cliff where a trail accesses Sugar Creek, but it is a gauntlet of steps. i went anyway.  i passed an old couple at the 3rd landing who followed me down the cliff.  i made my way down to the river and plopped myself upon a rock at the bank, looking out at nothing but river bend to the right, sheer white cliff to the left, and an explosion of autumn in the trees before my eyes.  looking at the water the trees and the sky rippled softly.  i sat on the rock for 20 minutes or so.  i heard the old couple make it down the steps behind me, the wind was subtle.  the water was silent and the skies were still.  it was something to notice in a world of rushing days.  i notice it every time i visit the park. 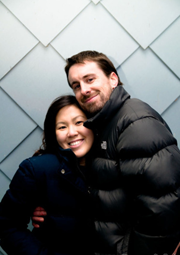 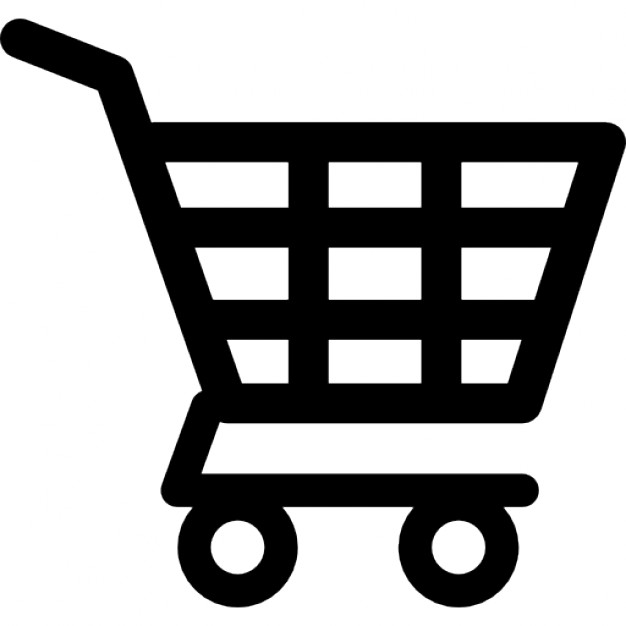 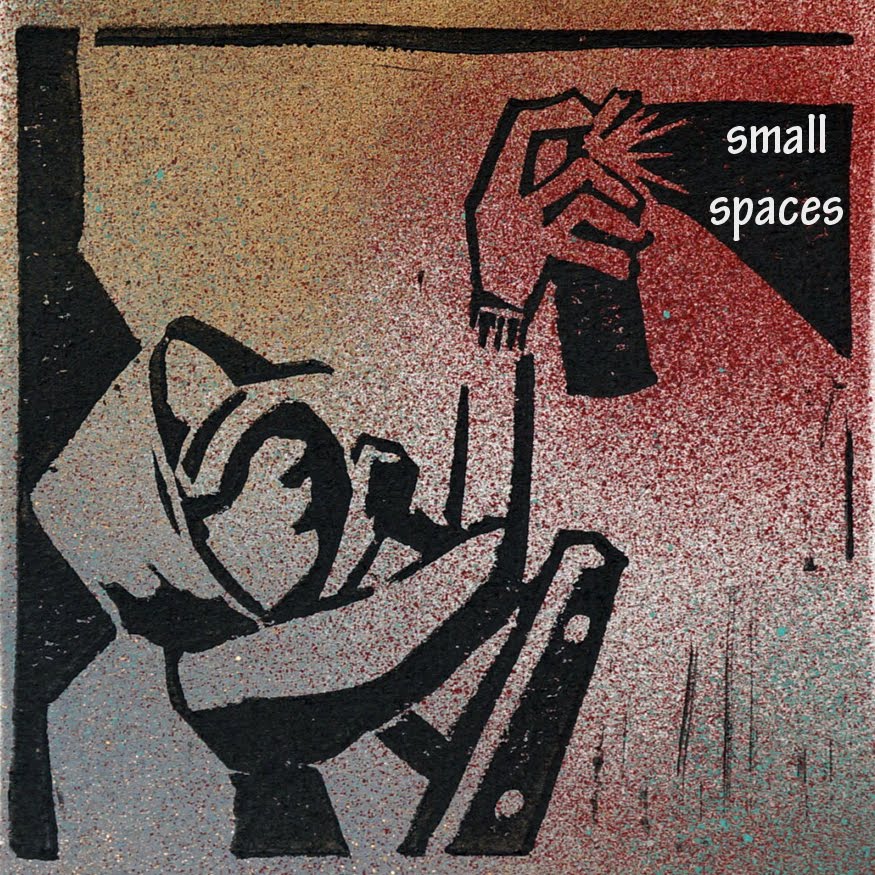 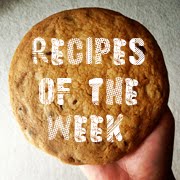 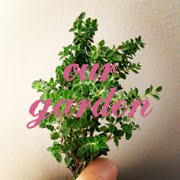